Contamination has always been a problem within the bulk transportation industry. We can define a contaminant as any object, or substance that renders something impure. In practical terms, it can be described as any substance that is foreign and is not a component of the primary product or material. It can also be an object that is an unintended contact with the primary product or material.

Contaminants can have a negative impact on any type of bulk load, but often have overwhelming consequences when they come into play with food products or supplements intended for human or animal consumption. There are many types of contaminants that can ruin food products that are being transported in bulk. Examples of typical contaminants are fungi, residual heel from previous loads, corrosion, delaminating liners, vermin, and foreign objects such as: tools, phones, lights, pens, etc.

Tank maintenance can play a big role in minimizing potential contamination problems. It is imperative to maintain hygienic conditions in a tank between loads. A tank wash operation is a basic, common sense maintenance that is critical to reducing the risk of contamination. Unfortunately, the reality is the opportunity for contamination can still exist even if a tanker has gone through a tank wash process.

There have been many instances where a fully loaded tanker was contaminated following a proper tank wash procedure:

The one preventative measure that can catch these contamination events and stop them from occurring is to perform a cursory visual inspection of the internal tank conditions just before loading product. This can be problematic as tanks are confined spaces and are inherently dangerous to enter. OSHA has mandated safety procedures to help ensure the well-being of anyone that must break the plane of a confined space environment. A proper and safe confined space entry, requires training, manpower, equipment and administrative oversight. This means that a quick visual inspection can add complexity, cost, and an additional safety concern into the process.

Zistos has created a video inspection system that can be inserted into a confined space, such as a tanker, to look for these potential contaminants with no entry required. The tanker inspection system, HDTI-5AR-TIP6-3.5Z, can provide a high-resolution image of conditions inside of the tank, viewable by an individual who remains outside of the confined space-envelope.

The ZistosHD tanker inspection system consists of a telescoping pole with a camera on the base. We insert the pole and camera assembly into the tank via the manway. A swivel assembly on the pole spans the manway opening and allows the camera to be manipulated by the user so it can view any area of the interior. The system generates a wireless HD video signal that can be viewed by the inspector, or others, on a body-worn, hands-free, tablet display. It can also be wirelessly transmitted to an existing network and viewed on a supervisor’s computer. The self-illuminating camera also features a 30X optical zoom that can magnify the smallest of suspicious indicators of potential contaminants.

The inspector can scrutinize the interior to make a final decision, just prior to load, that conditions are acceptable and there are no obvious sources of contamination. Inclusion of this video inspection tool in quality control procedures can go a long way in minimizing the potential for many sources of expensive and devastating contamination events. As the old saying goes, “An ounce of prevention is worth a pound of cure”! 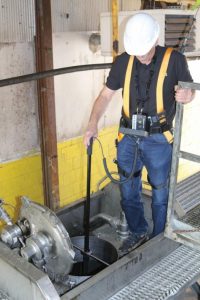 The Zistos Tanker Inspection System (IAD-TIPZ40-B6) that lets you visually assess conditions inside the tanker. The system allows you to identify hidden hazards and inspect for problems such as: structural issues, residual heel, vermin, foreign objects and more – so NO confined space entry is required!

Rail tankers and tanker trucks – are confined spaces that pose significant risks. Confined space entries result in over 11,000 accidents and nearly 100 deaths each year. In addition to the human toll, the cost to companies can be staggering.

This uniquely-configured video pole camera inspection system is inserted into a hatch, as shown above. It allows the pole camera to stay situated on the man-way, without the need for the operator to support its weight in position.

The system utilizes a self-illuminating, high-powered 40X zoom camera positioned at a right angle on the end of a pole. The camera can rotate 360° in a horizontal plane and pivots forward, back, left and right for a full range of motion. Images are viewed on a 5.6” LCD display that can record live video or still images to an SD card, or transmitted via WiFi to a network or smartphone for later review.

For more information, please don’t hesitate to reach out by phone: (631) 434-1370, email: info@zistos.com or website: www.zistos.com.  We look forward to hearing from you.