The ZistosHD Under Door Camera System (HDTS-5AR-ZDV) is designed to help operators conduct both visual and audio (which can be disabled) surveillance into a room, through the space under a door, during a tactical mission. The system includes a specially designed, hand held pole mounted camera that is approximately .25” thick and can be inserted into the space between the floor and a closed door. The pole camera transmits encrypted, low-latency (delay), Wi-Fi video images that are viewed on a rugged 5” display. The system also supports wired operation in situations where wireless operation is not feasible.

This special dual view camera has 2 cameras recessed within its tongue. One looks forward into the room for a subject and the other looks up to check for booby traps or barricades on the back of the door. The two images generated by the forward and upward looking cameras can be toggled on the display with the push of a button. This camera has IR illumination to covertly light up a room without being visible to the human eye. If the door doesn’t have the necessary quarter inch of door to floor clearance, an air jack is provided in the system to lift the door enough to slip the camera underneath.

The specially designed, dedicated 8’ telescoping pole with universal joint for this system facilitates horizontal panning of a room while the operator remains out of the fatal funnel of the doorway. For long term surveillance operations a drop cable can be used, allowing the operator to set the camera and view the image from a safer location.

The 5” display included in this system features a rugged, industrial design, excellent screen brightness and resolution. The tablet features a removable battery that is hot-swappable. This negates the need to take the display out of service if its battery gets low. The display can be worn on the wrist, chest, neck or can be pole mounted at the user’s preference.  It also has a removable SD card that can be removed to archive captured images and video clips.

The ZistosHD wireless bridge accessory allows the system to interface to a standard cell-modem, (a product that is offered by most major cellular carriers). This allows transmission of real-time video from anywhere that has cell coverage – to anywhere that has internet access!

This tool is excellent to support jobs that involve a barricaded subject, hostage situations or to help minimize collateral damage when explosive breaching techniques are utilized.

ZistosHD Tactical Cameras have been designed with the dangers of law enforcement operations in mind. These cameras allow law enforcement to establish “visual dominance”, it allows tactical teams to see their subjects without being seen themselves. This ability gives them a distinct advantage in any tactical mission.

All ZistosHD cameras are modular with all ZistosHD kits and components. This allows the system to be dynamically configured in different ways and allows the systems to be used to maximum benefit in many different tactical situations and environments. They also feature encrypted wireless video streaming. This enables the video to be shared in real-time amongst other team members, or with a command location. If needed, the system can also be used in a wired video mode with the transmitters disabled. The system batteries are rechargeable and have a battery life of up to 10 hours, depending on configuration and use, allowing the system to be used during lengthy missions without the need to worry about system power issues.

Some of the uniquely designed cameras and their capabilities are listed below:

The ZistosHD Under Door Camera (ZDV-HD) is designed to slip under a door and give operators both visual and audio (can be disabled) surveillance into a room during a tactical mission. If the door doesn’t have the necessary quarter inch of door to floor clearance, an air jack is provided in the system to lift the door enough to slip the camera underneath. This special camera actually has 2 cameras recessed within its tongue. One looks forward into the room for a subject and one looks up to check for booby traps or barricades on the back of the door. These two cameras are easily switched between with the push of a button. This camera has IR LEDs to covertly light up a room without being visible to the human eye. The specially designed telescoping pole for this camera facilitates horizontal panning of a room, while the operator remains out of the fatal funnel of the doorway. For long term surveillance operations a cable can be used, allowing the operator to set the camera and view the image from a safer location. This tool is excellent to support jobs that involve a barricaded subject, or to help minimize collateral damage when explosive breaching techniques are utilized.

The ZistosHD Ultra Low-Light Camera (ULC-2.0IR-HD) is a high-definition, 1080P camera. It can see in complete darkness for distances that surpass the range of most other low-light tactical video cameras.  The camera’s IR LEDs are completely invisible to the human eye and allow for team members to covertly search for a hidden subject in potentially dangerous & dark environments. The camera’s internal high gain microphone can be used to listen for the subtle sounds emanating from subjects that are trying to remain hidden. This microphone can be capped using the supplied mic screw when audio surveillance is forbidden. The Ultra Low-Light Camera can be used in any weather event due to its weatherproof housing. With the mic screw installed this camera can be complete submerged in water.

The Dual Mode Thermal Camera (THC-51D-HD) is a single camera module that has 2 cameras within. Not only is there a thermal camera to look for heat signatures, but there is also a black & white IR camera to gain more detail. This is an important capability because thermal images are great at detecting the presence of individuals in dark environments, but the images can sometimes be ambiguous. The dual mode video capability gives you the best of both worlds. The operator can switch between the two modes by changing the illumination levels of the camera without the need to change any components. This dual camera is ideally suited to look for subjects in wooded areas, bushes, attics, crawl spaces and other dangerous, dark or unknown environments. The thermal resolution for this camera is 320×256, which generates a meaningful thermal image. This is unlike than most thermal fusion cameras on the market today that offer very limited thermal resolutions and are ineffective when used in thermal only mode. The Dual Mode Thermal like most ZistosHD cameras has an internal microphone for audio surveillance and can be turned off by installing the provided mic screw when audio surveillance is forbidden.

The 10X IR Optical Zoom Camera (WPC-2.5ZIR-HD) is a high resolution, 1080P camera with the ability to zoom in, optically, 10 times without losing ANY resolution (which would be the case for digital zoom cameras). This allows the operator to see greater detail, at greater distances. It is ideally suited for looking down from high rises, viewing large void spaces for subjects or and more distant surveillance operations. The IR Zoom is also provided with self-illuminating IR LEDs but isn’t a strictly black and white camera. This camera operates as a color camera until the IR illuminators are turned on. At that point, the picture transitions to a low-light sensitive, black and white image. This camera housing is weatherproof and submersible up to the ZistosHD handle. This camera is also audio capable and is provided with the mic screw when audio surveillance is forbidden. 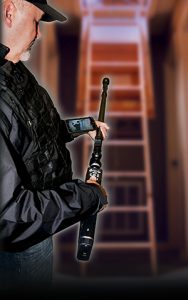 The ZistosHD system offers a state-of-the-art, high resolution tactical video tool that allows a tactical team to make a safe visual assessment of dangerous conditions, using highly detailed video images. The new ZistosHD encrypted wireless video system supports full 1080P HD video with most camera options. This new system design maximizes its suitability for use in many different tactical applications by offering interchangeable modules. They can be switched in the field to enhance the effectiveness of the system, in many different environments and applications. The system has been engineered to offer the highest resolution images that can be viewed on a variety of different digital display options, such as phones, tablets, laptops. The ZistosHD system will support up to three different simultaneous viewers. The images can be transmitted via wired or wireless methods and the phone display can be pole, or wrist-mounted.

Unlike the older easily compromised analog wireless video, our new wireless technology has been selected to provide a safe encrypted video stream that cannot be intercepted and is viewable without an appreciable delay. 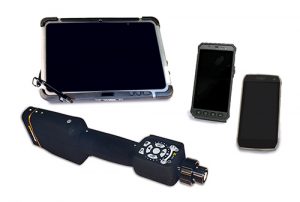 The heart of the ZistosHD Tactical Video System is the ergonomically designed HD Handle. The handle offers integrated push buttons that facilitate all operations, including, illumination level control, still image

capture, video record, zoom functions and motorized camera pan controls. The handle accepts a rechargeable lithium-ion battery that has an easily viewable, built-in battery charge level indicator. The battery charge level is even viewable when the system is off or the batteries are unplugged from the handle. The battery runtime will typically last 6+ hours depending on camera options and illumination settings. An external power input is also available as an option for alternate external power sources. The handle is ruggedly designed and all antennas are internal to prevent damage from rough handling. 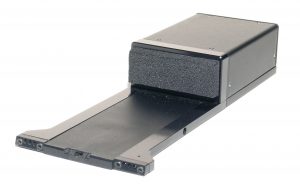 The Zistos Dual-View Under-the-Door Camera (ZDV) provides a means of covert visual intelligence in hostage-barricade scenarios. It features two high-resolution, CCD camera chips that toggle from one to the other providing a safe and covert view of both forward looking into a room as well as upward looking at the back of the door. It employs IR illumination, video-frame integration and ultra-sensitive audio microphone.

Designed for tactical surveillance applications, the Zistos StealthSCOPE™ (SSM) is a videoscope that combines a powerful internal 980nm IR laser light source — completely invisible to humans — with electronically-enhanced, low-light video processing. Its 9mm diameter allows it to be inserted into small openings and tight areas. It can generate images of objects and individuals as far as 20+ feet away in pitch darkness. 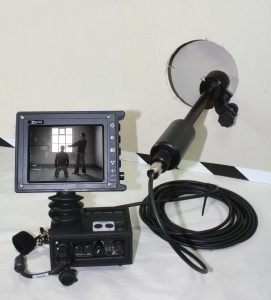 The newly improved Zistos Through-The-Wall (TTW) system now provides audio as well as visual intelligence in hostage-barricade scenarios. The added audio module enables tactical teams to have additional insight into a current situation. The system utilizes a high performance, low-light camera equipped with a pinhole lens for covert observation into an adjacent interior room through a sheetrock wall. 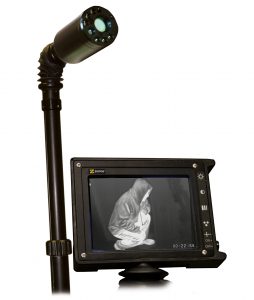 Other Tactical Surveillance Products can be viewed here.